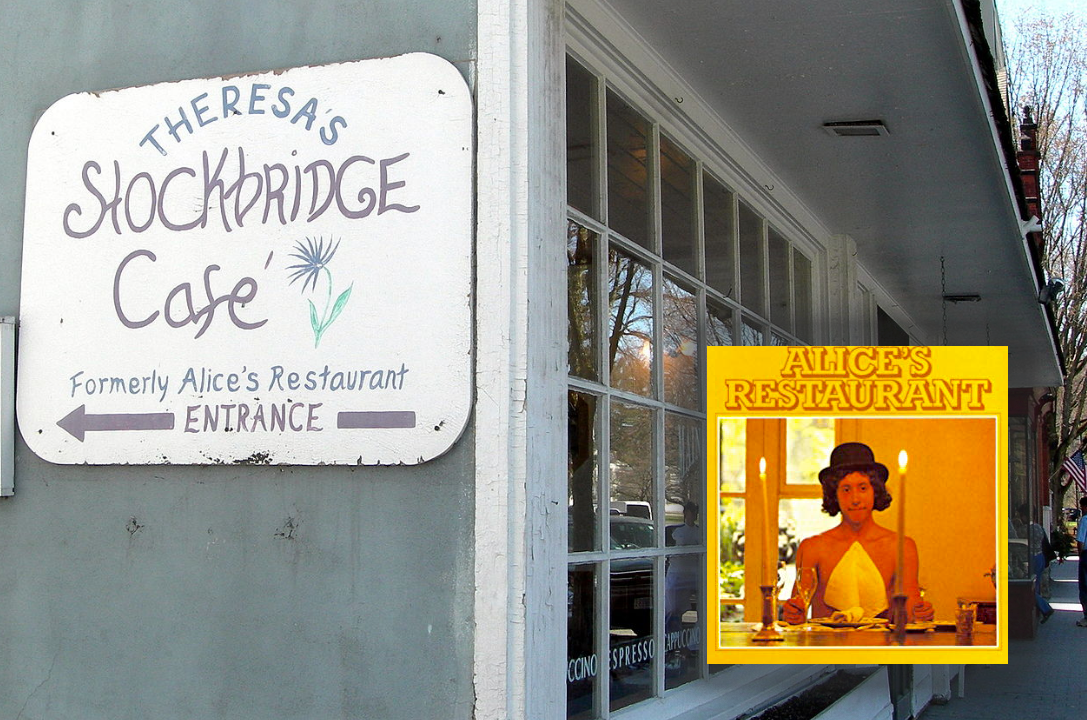 On the 10th day of my New England Reunion Bike Tour, I was waiting out the rain in Lee, Massachusetts. I set out for my last meal in town before I was to leave the next morning. This area is known for its history and its embrace of mystery and new-age trends. Here’s what happens when my course collides with local forces.

The Salmon Run Fish House. It sounded out of place here in Western Massachusetts. Sometimes all you want, and really need, is something good to eat and the Yelp reviews were good. But, there was more than food to be found here. It was a rabbit hole of sorts taking me on a journey back to a different time.

Being a Bar Fly

I was kind of stuck in Lee, MA on that rainy evening so I did not mind settling into a comfortable place for a couple hours. The Salmon Run Fish House restaurant was an old, narrow, dated place with paneled walls, maybe a dozen booths and a small bar. The waitress strongly suggested I might want to take a seat at the bar since booths were reserved and they would be occupied soon (Got it! I’m sure they did not want one person in a booth). Or, maybe it was just fate to sit at the bar that night.

A couple sat at the bar near me and we began a conversation about local craft beers. I recommended the beer I was drinking called Two Roads: Road 2 Ruin. It’s a mighty good double IPA brewed in Stratford CT. Their marketing tag “The Road Less Traveled” seemed like the perfect motto for my adventure.

My new bar new friend, Bill Russell, was a pleasant, seasoned guy, 73 years old with an attractive wife. Although they now live in Lenox, he likes to come to this place for the food and atmosphere. He’s retired now but has a couple of unique interests and a memorable past.

Where it All Began

Bill used to live in nearby Stockbridge, a fairly famous artsy destination in the Berkshires. At least one reason for its recognition is that it was the scene for Arlo Guthrie‘s famous song and story telling adventure called Alice’s Restaurant (actually titled Alice’s Restaurant Massacree).

It turns out there once was a restaurant called The Back Room owned by Alice Brock and her husband Ray Brock in Stockbridge. The 18-minute song and 111-minute movie made from it are largely based on actual events outside of the restaurant and Bill Russell was part of that whole scene.

Bill grew up in Delaware but was sent by his parents as a teenager to the Stockbridge School in 1964 because of behavioral issues. It was a coincidence of time and place that Alice and Ray re-located to the the area from New York City. She became the school librarian and Ray taught shop at the school. Ray was an eclectic charismatic character who was an architect and talented woodworker. He quickly became an outspoken leader of an anti-establishment community which drew students from the school, including Bill and Arlo Guthrie. This was a turbulent time of radical social change, drugs and the Vietnam War.

The story of “Alice’s Restaurant” is about a memorable Thanksgiving dinner in 1965 when Alice and Ray invited everyone they knew to a big feast in their newly bought deconsecrated church in Great Barrington which they converted to a commune-like place for young students and bohemian friends to meet, to discuss ideas and to party.

Arlo and friend Richard Robbins decided to help clean up after the Thanksgiving meal and headed to the town dump after dinner to cart off garbage. But the dump was closed. They unloaded the garbage where they should not have and are eventually caught and fined in an overly dramatic police arrest. Later the next year, Arlo was called up for his Vietnam-era draft physical in New York City. Much to his surprise he was re-classified. He had dodged the draft – not because of behavioral or physical issues – but because he had been arrested for littering!

Ironically, Arlo’s dad, famed folksinger Woody Guthrie, was on his deathbed at the time suffering from Huntington’s Disease, a rare genetic disease that Arlo inherited but was fortunate not to suffer from.

A Legend is Born

Bill was one among the dozens that attended that fateful 1965 Thanksgiving Dinner. Alice opened a real restaurant in Stockbridge afterwards which was a brief success before she became fed up with the business and with Ray. They split up a couple years later. Arlo Guthrie wrote Alice’s Restaurant as more a storytelling than a song. But it was to become a perfect humorous symbol of the times.

A movie deal followed the song’s success. It was not one of famed director Arthur Penn‘s greatest films. The movie was shot in the Stockbridge area and expanded the story with added fiction but it could not save it from a poor script and mediocre acting. Many of the original friends of Alice and Ray got walk-on parts, including Bill Russell.

Bill Russell ended up living in a room near the restaurant in Stockbridge and got to know Alice well. He learned the craft of woodworking and ended up moving to New York City where he bought a shop at a time and place when it was affordable. He lived there for 25 years but eventually came back to Stockbridge. He continues to live off the income from properties including his NYC building which once was his workshop.

When Bill and I parted company that night he told me he would be heading to Provincetown on Thanksgiving Day, as he has for many years. Alice Brock is still carrying on their tradition by hosting a dinner for her close friends, including Bill.

Down the Rabbit Hole

Bill was like the Mad Hatter in Alice In Wonderland. He showed me the rabbit hole and I could not help but go in.

I learned Alice opened and closed several restaurants, wrote a few cookbooks and a biography called “My Life As a Restaurant“. Still, she’s always had a love/hate relationship with running a restaurant. She preferred a creative free-form style of cooking. Here’s an audio recipe for Salt and Pepper Soup recorded at NPR.

Today, Alice Brock (alicebrock.com) lives in Provincetown, MA and sells beach stones (painted stones meant to be hidden in strategic places) and other personal artwork through her website. Her former husband, Ray Brock, passed away in 1979. The deconsecrated church in Great Barrington was bought by Arlo Guthrie and is now the Guthrie Center at Old Trinity Church. where people people of all religions are welcome, musical events still occur and a large, open Thanksgiving dinner is served each year.

After googling the incident, characters and times, I viewed the movie Alice’s Restaurant on a library DVD. It brought back old memories including the strange times we lived through in the 60’s, including my own draft physical in Newark, New Jersey about that same year.

Arlo Guthrie has continued his tradition of touring and singing Alice’s Restaurant for 52 years (see current schedule). This year 2019 is said to be his last year culminating with his last show at Carnegie Hall on Saturday, November 30th.

Its fair to say that listening to this song has become an American tradition for many of us – linked with Thanksgiving, story-telling humor, questioning authority and an ability to laugh at the absurdities of life. To me it’s become as timeless and strange as Alice in Wonderland.