Robert F. Kennedy’s family held a private memorial service for friends and family at the Amphitheater at the Tomb of the Unknown Soldier in Arlington on Wednesday, June 6, the 50th Anniversary of RFK’s death. For me personally, it was an inspiring moment in my life I will remember forever,

I estimated the crowd at 3 to 4 thousand on that beautiful sunny day – fitting for the tone of the ceremony. I and a group of about 10 FreeWalkers members were fortunate to have been invited thanks to the generosity of Kathleen Kennedy Townsend, RFK’s first-born and mother of Kerry Kennedy Townsend, his granddaughter, who completed our Kennedy 50-Mile Walk this past February.

The ceremony was upbeat and inspiring with several choruses and two singers uplifting us with song. Most of the content of the program was many notable individuals reciting of the words of RFK taken from various speeches he gave throughout this life.

Kathleen Kennedy Townsend introduced the program while Congressman Joseph Kennedy III and President Bill Clinton were the primary speakers. Kathleen and Joe spoke of the man, his personality and his love of family. Bill Clinton spoke to RFK as a leader and his legacy.

Clinton went on to quote RFK, “Tis not to late to seek a newer world.” “But, we must speak to everyone with a feeling of love and an outstretched hand.” He summarized the spirit of Bobby with what he probably would have said if he were alive today at the age of 92, “We can do better. And because we can, we must.” 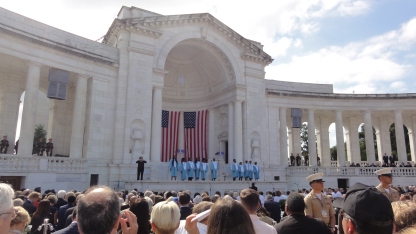 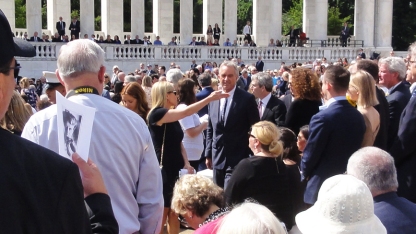 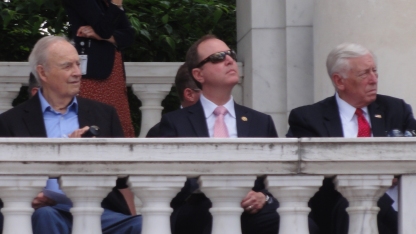 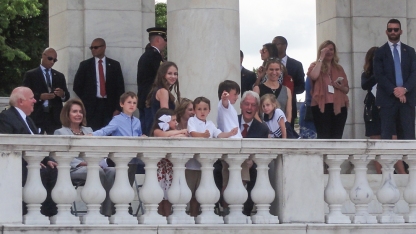 I can’t help but believe that everyone who attended the ceremony was moved to some degree and maybe recommitted to the ideals of RFK. His spirit lives on.

Here’s some video of the ceremony taken by USA Today:

Here’s a link to my Facebook album on the event.

It’s a bright sunny morning here in Washington D.C. But, there’s a feeling of sadness in the air as I get ready to go to a ceremony at Arlington National Cemetery to acknowledge and celebrate a life well lived but snuffed out much too early. Robert F. Kennedy died 50 years ago today in the prime of his life at age 42, leaving a family of a wife and 11 children and a nation so torn apart by meaningless violence from wars and racial strife. It’s sadder still because these things still haunt us today.

To me Bobby’s death was even more tragic as his political skills and awareness were ascending. His opinions changed as he awoke to the injustices around him. He always had enormous strength and energy and was known as someone who could get things done. By then he had cast aside the advice of his president, party and friends and decide that he needed to correct the wrongs on his own.

The only thing left was to convince a wary public that he could bring a fractured nation together. I don’t think anyone thought that it could be done. But, we all felt that if anyone could, it was Bobby. We hoped for the best. Our agony, even today, is that we will never really know the answer. Bobby had just won the big prize of the California primary and seemed destined to lead us out of the muck we were in.

The NY Times today had a piece about Richard Holler who wrote the Dion song “Abraham, Martin & John” in between the time RFK was shot and before he was pronounced dead only hours later.

He freed a lotta people, but it seems the good die young
But I just looked around and he’s gone.
Didn’t you love the things they stood for?
Didn’t they try to find some good for you and me?
And we’ll be free,
Someday soon it’s gonna be one day.
Has anybody here seen my old friend Bobby,
Can you tell me where he’s gone?
I thought I saw him walkin’ up over the hill
With Abraham, Martin and John.

I know we all had that feeling that nothing could be worse than what we have lived through. Or if it could, what would it be?

Having met his first-born, Kathleen Kennedy Townsend, this past year and her daughter Kerry, my heart goes out to the entire Kennedy family to have to relive the tragedy again, if for no other reason than to know that we all share the pain and the loss of what might have been. 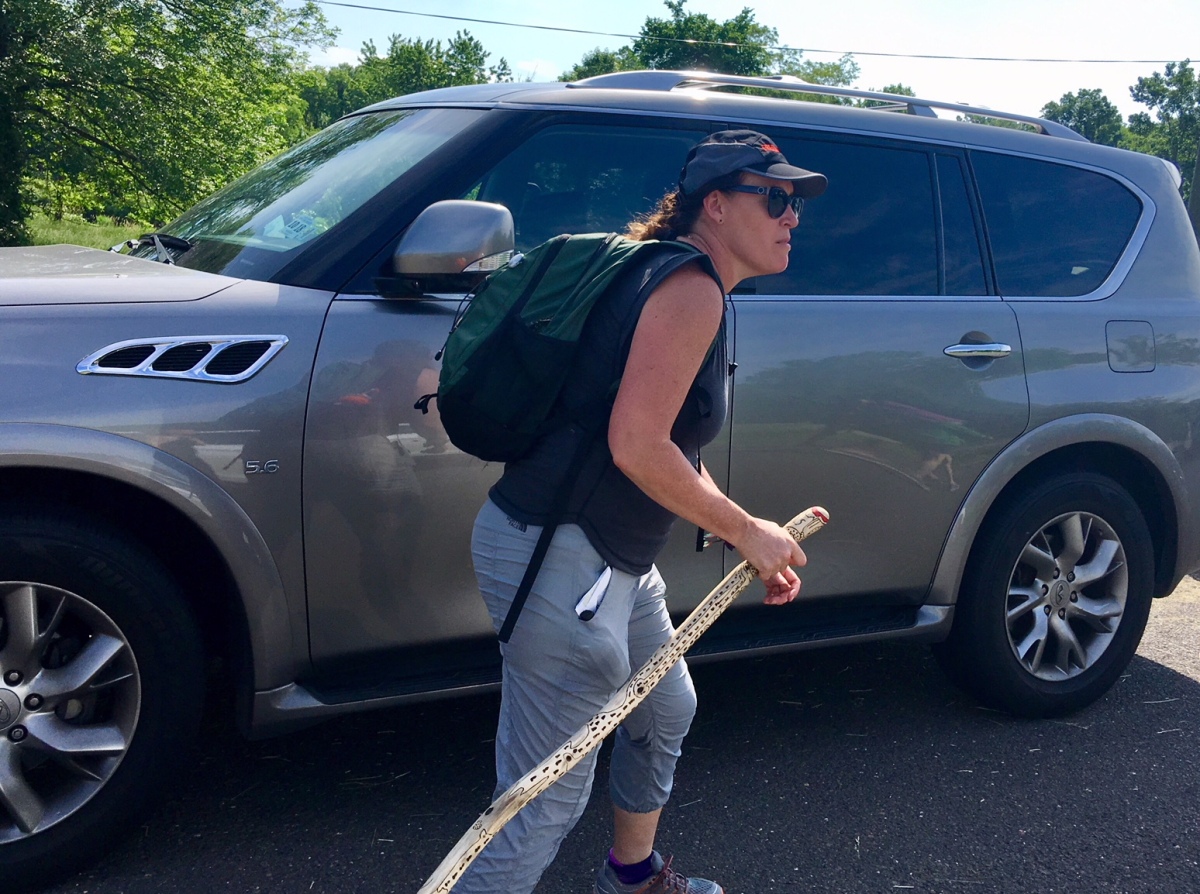 Yesterday, I and a large group of friends, saw Jenn Popper off on her long walking journey from Cranford, New Jersey to Gouldsboro, Maine. I could not help but recall what it felt like for me on my past Epic Bike Ride when I started and what’s ahead for her. There was great joy in hailing the beginning of the journey along with a certain amount of apprehension on what is to come.

To give you the brief background for Jenn’s Journey North, she is determined to channel her positive energy and good deeds to reconcile a bad experience she experienced a couple of years ago in a kayaking accident which took the life of her husband Michael. Among the abundant good will she has created and causes she has helped, is a JustGiving project for Michael Popper which has netted thousands of dollars for two of her favorite – FreeWalkers and East Coast Greenway. It’s a remarkable statement of generosity and empathy that I continue to ponder.

Jenn and Michael were a close couple that anyone could see really enjoyed our FreeWalkers walks and each other. To me, they demonstrated a certain joy in life that is hard to express, yet easy to see. A feeling I think we all desire. That made the accident even more tragic and unimaginable.

Many people wonder why one needs to walk 800 miles, or in my case, 1600 miles on a bike. Our natural inclination is to consider the goal as the reason for taking on a huge challenge. Her efforts have certainly benefitted others and will earn her bragging rights. But timing is everything. And, then there is the journey itself.

I look back on my long ride, finished just a few weeks ago, and realize that this or any goal could be considered arbitrary. The effort could have been harder or longer (or shorter). Despite my period of bad luck in the beginning, I finished with a unbelievable streak of good luck for most of the journey. The nature of a long journey is its unpredictability.

What I learned was that the most joy from the journey was being fully in the moment. You have a singular objective – to get to your next location. Things that you cannot control are accepted. It’s how you work with what you have that matters. There’s plenty of time to think and maybe even consider that life is just another similar long journey anyway.

A big hug goes out to Jenn with a mixture of empathy and jealousy that you are taking a great big journey that you will remember for the  rest of your life. Make the most of it. Michael would have wanted it that way.