Starting a new biking adventure by riding the Vermonter to Burlington. 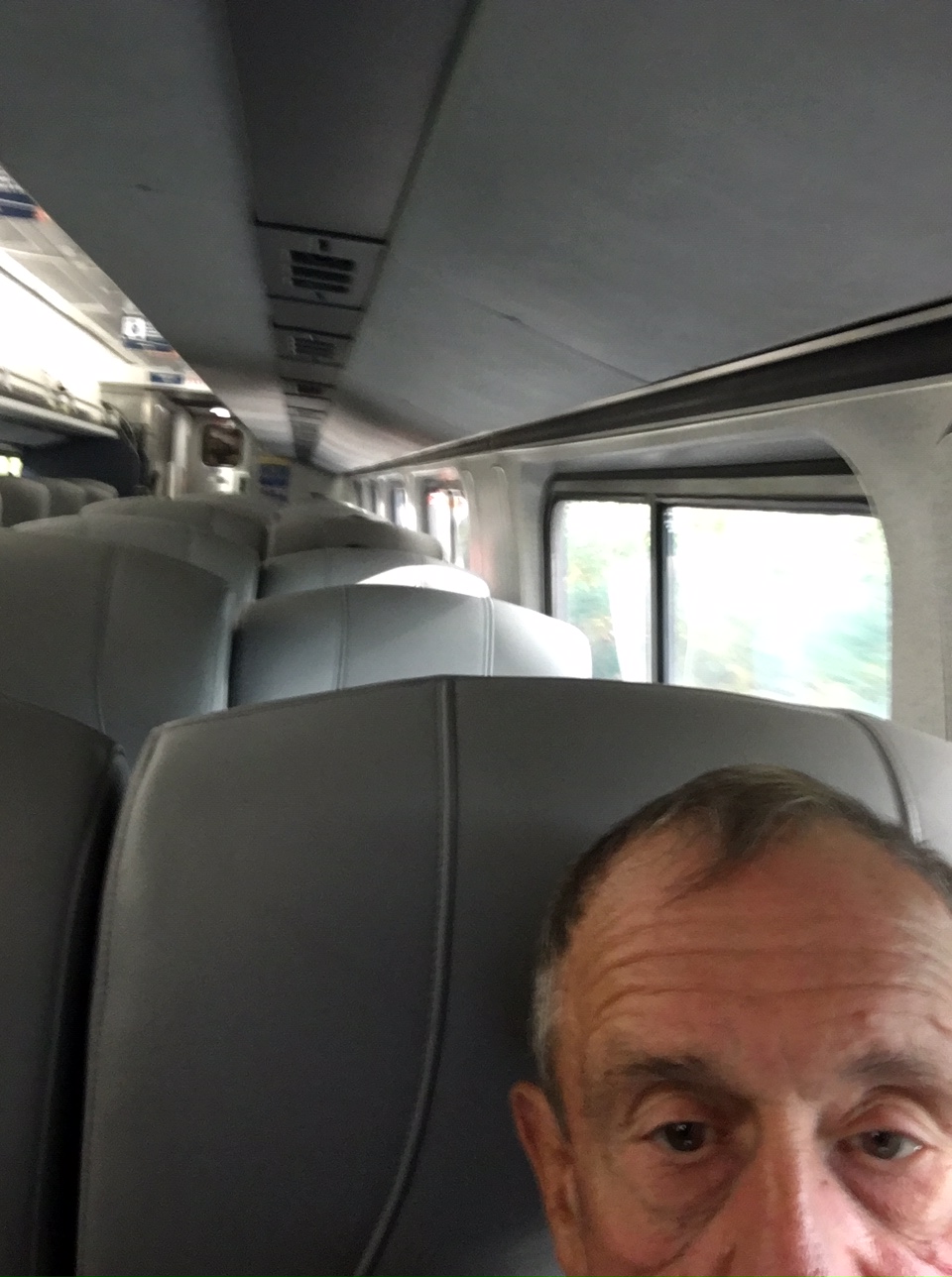 Greetings fellow virtual travelers. It’s been a while since I posted to this blog but if you are interested in my latest retirement biking journey – The Reunion Tour – Vermont & New England back to NJ read along. I’ll be attempting to post daily my 10 days of stays and cycling adventure (or whatever comes along). This is the first post of the journey. More background on the trip.

I discovered traveling long distances by train can be a great advantage. Yes, it generally takes longer than flying and you will experience numerous inconveniences due to a lack of consideration for bicycles. But once you are onboard the seats are more comfortable, the ride smooth and relaxing, free WiFi and at least for my Amtrak train today – The Vermonter – a simple bike rack storage so you can transport the bike without breaking it apart, as you would need to do for a flight. And, with my current sub-theme of ecology let’s give it up for trains which consume a whole lot less carbon than the other alternatives. All good reasons to promote train transportation, in my mind.

But, the most convincing argument for a train ride is that a one-way train ticket is a whole lot cheaper at $58 for me, plus $20 for “Silver” my bike. That’s cheaper and easier than flying (need to dis-assemble/re-assemble, pack/unpack), driving there (need to return with the car too) or shipping the bike to a shop and having it re-assembled there.

Planning the trip to  Burlington, VT where I’ll get off was a bit of a challenge. The Vermonter originates at Penn Station NY. So, I needed a way to get me and my bike to NYC to catch the train. I could have literally rode from my house to the Morristown NJ Transit station then to NYC except for the fact that on weekends, bikes need to arrive at Penn NY before 10:00 or they are not permitted! That would have meant leaving very early. Instead Mary Ann drove me at 9:00 a.m. to Newark Penn where I planned on catching the PATH train to Penn NY. My bike weighs about 24 lbs. My panniers and rear bag add about 40 extra unsteady lbs. making it unwieldy.

My first problem was getting my bike and 3 bags up an escalator since the Newark Penn elevator was not working! I saw a bike messenger just taking the escalator up so I followed. Bam! The bike was highly uncooperative and flipped backwards throwing the bags off it. But just then a woman appears watching this and says “I’ll get you up to the platform.” What! She advises taking the 3 bags up while she watches the bike, then walking the bike up the stairs where she instructs me on where to pick up the next PATH train. Beautiful. She was sent from heaven, I’m sure.

The PATH train continues to Journal Square where I transfer to another train. By now, its around 10 am and trains are getting crowded with me and my bike taking up too much room. We finally make it to 33rd St. Now its a matter of finding elevators you never knew about to take you up to the street then back down to Penn Station. After waiting about ½ hour the Vermonter appears on the board. This is the only train to Burlington. Each day it leaves at 11:30 a.m. and arrives 9 hours later 7 miles outside of Burlington in Essex Junction, VT.

Another elevator ride down is requried to the track #8. Then, finally, the conductor needed to figure out what car had the rack where I could put my bike. The Vermonter only allows 3 bikes at a time on the whole train.

I’m in Springfield MA as I write this with another 4 hours to go. Then, I need to reset the bike and make my way to my airbnb stay for 2 nights. Looking forward to getting there and concluding today in one piece. All Aboard?

Well Amtrak did its best to live up to its reputation and came in 3o minutes late. We departed the train at about 8:50 and the rest was up to Google Maps. I’m a seasoned enough rider to take on a challenge riding in the dark but it was relatively easy to follow the online guidance direct to my stay 7 miles away.

And, a good stay it was at an airbnb at 32 Spruce St. A few convenient blocks from the city activity and close to the lake but far enough to be very calm and peaceful. Starved, I headed out to a corner “Gastro Pub” to get a couple beers and a burger. All was right with the world again.

Join 221 other subscribers
Follow My Plan C on WordPress.com